Once upon a time, consumers viewed Sony as a desirable brand. The company was renowned for innovation: the legendary Walkman, the groundbreaking PlayStation, Aibo, the first commercially available robotic pet.

Fast forward a few years, and things are looking grim. They now produce derivative rubbish that nobody in their right mind would want to invest in. Take the NW-HD5 for example:

The Bean is equally terrible:

Surely somebody within Sony must have noticed that this thing is a pig! What will they think of next? The Sony Spud – an MP3 (sorry, ATRAC3) player shaped like a potato?

Poor products and incredible errors of judgment have plagued the company in recent times: take their sluggish, wait-and-see approach in the TV market. Upon closing their south Wales manufacturing plant with the loss of 650 jobs, Sony announced:

Their lack of foresight is astonishing for company that claims to be at the forefront of technology. They’re playing catch-up now with the Bravia range of televisions, but is it too little too late? The Bravia range may have a nice television campaign to support sales, but Sony’s competitors are offering products of similar (if not better) quality at a lower price.

The PlayStation 3 is another great example of a product that arrived too late for far too much money. The Xbox 360 currently retails at Ã‚Â£296.96 on Amazon, or a mere Ã‚Â£195.48 if you fancy the Core System. The PlayStation 3 comes in at a whopping Ã‚Â£419.99! It may play Blu-Ray discs (which will be obsolete in no time as broadband speeds and on-demand services increase), wifi and a larger drive, but why bundle these things in off the bat?

Sony have just unveiled their latest product: a clock radio with an integrated iPod dock.

Another piggy pig pig! It is so piggy is stinks like bacon! It looks like a car battery or possibly a toaster.

The VAIO is yet another example of the derivative rubbish they’ve been peddling for far too long. 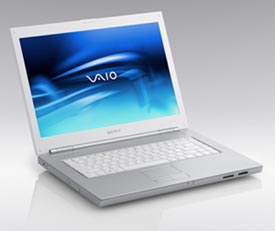 Sony’s retail outlets are looking very tired – if you’ve walked past the one on Baker Street you’ll know what I mean.

Sony – please, go back to square one, head back to the drawing board and dream up some new, innovative, exciting products before it’s too late.